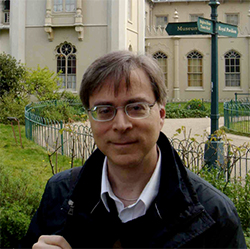 (HealthNewsDigest.com) - The music world is mourning the tragic and unexpected death of award-winning author, performer, professor, and music scholar Michael Pisani, who worked with Leonard Bernstein and other giants of the musical world, and advanced our knowledge of the evolution of music in drama and its use in creating national and exotic identities. The renowned musician unexpectedly passed away July 9, 2019 at his home in Rochester, New York from an apparent heart problem. He was 65.

Born in Gary, Indiana, Pisani showed an early aptitude for music, creating and practicing on a keyboard he created out of paper at the age of three and teaching himself how to play simple tunes on his grandfather’s accordion by four. An accomplished pianist, conductor, and accordion player, he entered his first musical competition at age 8, winning the first of more than 50 awards and trophies, including the top prize in a statewide championship at 16 for performing a transcription of the Brahms Piano Concerto in d-minor on the accordion.

Pisani received his Bachelor’s and Master’s degrees at Oberlin Conservatory of Music where he studied piano, composition, voice and conducting, and earned a doctoral degree in musicology from the University of Rochester’s Eastman School of Music.

After working as a pianist, vocal coach, choir director, conductor, and musical director of various orchestras and arts commissions, Pisani worked for several opera companies in the 1980s, among them Houston Grand Opera, the Seattle Opera Wagner Festival, and Opera Company of Boston. He accompanied rehearsals for many famous opera singers and stage directors and conducted performances of Monteverdi’s Orfeo and Handel’s Xerxes at the Skylight Opera in Milwaukee. He was also invited by the great American composer and conductor, Leonard Bernstein, to prepare the casts for the triple premiere of his opera A Quiet Place for the Kennedy Center in Washington, D.C., La Scala in Italy, and the Vienna State Opera.

In 1989 he went to Russia with renowned conductor Sarah Caldwell to arrange for performances of Bernstein’s opera in St. Petersburg and Moscow.

For the past 22 years, Pisani taught music history, theory, opera, and film music at Vassar College in Poughkeepsie, New York, where he has served as chair of the music department and was honored with an endowed chair. While he taught music of all periods and styles, he was principally a scholar of the 19th and 20th centuries, especially dramatic musical forms such as program music, opera, musical theatre, and film music. He also wrote about music’s unique role in the creation of national (and exotic) identities. His book, Imagining Native America in Music (Yale University Press, 2005), won an ASCAP-Deems Taylor Award in 2006 for its examination of musical representations of Native America from Columbus’s time to the present.

His second book, Music for the Melodramatic Theatre (University of Iowa Press, 2014), explores the rich tapestry of theatrical music in the 19th century, particularly music used to accompany dramatic plays in English-speaking countries.

Pisani also authored numerous publications on opera and film music, including a chapter in The Oxford Handbook to Film Music (Oxford University Press, 2013) that demonstrates some of the clear precedents for film music in the way music was designed and used for the stage, an essay on “Teaching Film Music in the Liberal Arts Curriculum” first published in Teaching Music History (Ashgate, 2002), others in Film Music II, published by the Film Music Society of Los Angeles (2004), and a chapter on music in the forthcoming Cambridge Companion to English Melodrama. At the time of his death, he was working on numerous projects, including a new kind of music-theory textbook, case studies of music in the nineteenth-century American spoken theater, and piano transcriptions of major works from the orchestral repertory.

Pisani was committed to the study and promotion of American music and served on the board of the Society for American Music. In addition, he was the editor of the quarterly journal, American Music.

Among his proudest musical memories was accompanying tenor Jon Vickers in a run-through of Verdi’s Otello at the Houston Grand Opera, and playing a rehearsal of A Quiet Place at La Scala, while Leonard Bernstein conducted and composer Luciano Berio turned pages. Close friends also remember how, after Michael accompanied noted baritone Kurt Ollmann in a French song recital at Lincoln Center, Maestro Bernstein emerged from the audience, clambered onto the stage, applauded them, and then knelt down to kiss Michael’s hands in appreciation.

Michael loved the word “autumnal,” reveled in Central European foods and pastries, and heartily enjoyed traveling, immersing himself completely in the culture of the countries he visited, often living at the homes of far-flung friends and local families, and delighting inhabitants with his ability to speak with them in their native languages, including Italian, German, French and Greek.

“Michael was the most remarkable musician and perhaps the most special person I’ve ever been privileged to know,” said Mark Stubis, a pianist, Juilliard graduate, and nonprofit executive who knew him for 44 years. “An astonishing number of people from all walks of life were drawn to him and won over by his dazzling musical talents and tremendous musical knowledge, his gentle humor and easygoing nature, his mischievous, quicksilver intelligence, and his ability to constantly surprise, whether by greeting the manager of an ethnic restaurant in his own dialect, playing the fiendishly difficult overture to Mozart’s ‘Marriage of Figaro’ on the accordion at a square dance or as a wedding present as he did when my wife Qin and I were married, laughingly solving impossible party games involving preposterous situations and obscure word puzzles, or reciting snippets of the ‘To be, or not to be…’ soliloquy in Latvian. His never-ending fascination with everything around him made him fascinating to be around and made all of us grateful just to be his friend. His departure leaves us stunned, hollow, and bereft, thankful beyond imagining for all the memorable yesterdays, and grieving for all the tomorrows we will never have with our one and only most special friend Michael.”

Pisani is survived by his father, Mario; his sisters, Denise and Linda, his nieces, Jennifer and Katherine; his nephew, Josh; his great-niece and nephew, Keira and Biagio; his cousins in Milan, Italy, and many other loved family members and friends. He was preceded in death by his mother, Dolores. His ashes were interred at Historic Maplewood Cemetery in Crown Point, Indiana.

A memorial in words and music will be held September 22 at 3 pm in Vassar College’s Skinner Hall of Music, 124 Raymond Avenue, Poughkeepsie, NY.