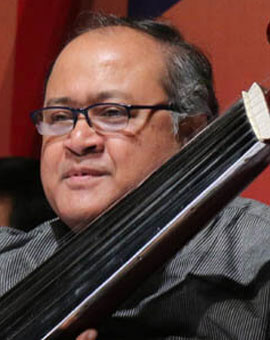 Somjit Dasgupta (born1953) preserves the tradition of playing Hindustani classical music on string instruments belonging to the family of which the most popular today is the ‘sarod.’ As a musician he performs on sarod, rabab, sur-rabab, mohan vina and sursingaar, the playing techniques of which all he inherited from his late mentor and guru Shri Radhika Mohan Moitra, a famous sarod player and a foremost musician of our times.

Unlike the majority of professional musicians, particularly instrumentalists, Somjit Dasgupta does not come from a family of traditional musicians. He took to music entirely as his passion at the same time training himself as a painter. As a child he was fascinated by a large collection of musical instruments that his grandfather, a gentleman of leisure and taste, had kept in his estate in the once called East Bengal, then East Pakistan, and finally now known as Bangla Desh. The collection that captured the imagination of the little Somjit was however, destroyed in the attacks of the Pakistani army on the East Bengalis.

Once moved in Kolkata, as a young man Somjit was an ardent listener at the concerts that flooded the cultural scene of Kolkata in 60s and 70s. He had began learning to pay the sitar at the age of 10 from his father and in his pursuit of music a deep emotional experience occurred when he heard Radhika Mohan Moitra give a six hour concert in Kolkata. That moment he decided to take up sarod as his instrument and if possible learn from ‘Radhu Babu’ as most people called Radhika Mohan Moitra. But to begin with Somjit tried his luck with Ali Akbar who told him that he was too busy traveling to be a regular teacher and suggested that no body more suitable for Somjit than Radhu Babu himself.

Radhika Mohan Moitra lived close to the Jadavpur University Campus in Kolkata in his sprawling bungalow, just as behooves a rich zamindar (big land owner) and had also hired another house nearby for his disciples and guests. This is where the young Somjit aged thirteen managed one day to visit and pleaded to be taken as a disciple. To his surprise Radhu Babu readily agreed, and after consulting the Panchang or the Indian astrological calendar for an auspicious day, he asked Somjit to come and start learning after 20 days during which he was supposed to find himself a sarod as well. Somjit managed to find one and the learning began at the fixed day in 1973. Somjit was exceptionally fortunate he was able to learn from scratch from Radhu Babu. For nearly all other disciples the usual course was to begin under the tutelage of a senior disciple such as Buddha Deva Dasgupta, who was regularly teaching at the Mohammad Amir Khan School of Music (an academy that Radhu Babu used to run to honor his own teacher Ustad Mohammad Amir Khan) and then graduate to learn with Radhu Babu. But Somjit from the day he began training stayed at the house of Radhu Babu. He stayed for eight years till the teacher passed away on October 15th, 1981. It was learning in the traditional system of total and constant proximity with the teacher, when not only music and the total knowledge of the teacher is absorbed by the student, but also the all the ways of feeling and understanding life and its conduct as lived by the teacher is also imbibed.
Somjit plans to project and preserve Radhu Babu’s traditional wealth of instruments, which even has many kinds of instruments from other rich patrons of music who had gifted them to Radhu Babu. This includes a small sitar made around 1800 CE and another in 1900 CE both presented by the Dhaka nawab to Radhu Babu. Perhaps this is the oldest surviving sitar, perhaps played around 1770s, and very small and hardly known as no picture of it has appeared in any book so far says Somjit.
Somjit says that he preserves all these instruments for love and not money. Keeping the heritage for its constant living use, is his is mantra, he tells us. For the time being he not little beyond preservation but he is thinking of doing something bigger, such as a thorough restoration of all the instruments to their playing efficiency. His present financial assets and a fellowship from the Sangeet Natak Academy, Delhi are merely enough to keep them ‘in situ’, but for their display and demonstrative performances by the artists, a larger space to make a gallery would be needed. Added to this must be, he says, an archive of Radhika Mohan Moitra's recordings of the radio performances and public concerts which are very large in number and records of which are spread
All over the world there are a large number of foreign recordings, some of which have been digitized and kept at the University of Sydney. The AIR Patna, and also a sursingaar recording preserve a sitar duet recording. In fact what needs to be done is a historiography study of the development of Radhu Babu’s musical career and innovations so that his music is kept alive by players and not just archived. A Foundation made in the memory of Radhu Babu devoted to such a task would be the ideal means of achieving this aim. Somjit is sure that some new and young players are ready to learn these instruments and if the All India Radio inviting some of the living players of these instruments broadcasts some National programs of music, revival would be easy. People would get to know that contrary to what they think the rabab is still alive and like the dhruvapada it can be revived.
Somjit Dasgupta in his playing of the rabab has displayed the genuine style of his teacher Radhika Mohan Moitra . Though by and large this school follows the mainstream 20th century style of sarod (developed from the rabab playing as shown above) repertoire as it evolved from the revival of solo instrumental music, it has a special quality of systematic expansion (barhat) of the raga. Somjit has very effectively displayed the stroke-work of the plectrum (java) on the rabab (not easy to produce on a wooden surface. He has discreetly chosen his ragas as they are full of depths capable of being deeply explored by a creative player. The Bhimpalasi has been done in a special manner with lesser emphasis on pancama as is usual with the vocalist. The album is indeed a connoisure’s delight and should certainly enrich a good listener’s collection.

When searching in these audio databases try these Keywords:

Enter a a guest.  Search by map or by geographical color wheel.