The stained glass window in the Thompson Memorial Library at Vassar College appropriately represents a memorable event in the history of the higher education of women, namely, the conferring of the first Doctorate to a woman. In 1678 the University of Padua conferred the degree on Lady Elena Lucretia Cornaro-Piscopia, a young Venetian who, as a woman, had previously been denied the examination for the Doctor of Theology degree.

Lady Elena Lucretia was born in the Palazzo Loredano, at Venice, June 5, 1646. She was the third child of John Baptist Cornaro-Piscopia, Procurator of St. Marks, and his wife Zanetta Boni. The Cornaro-Piscopia family were people of note and importance in the history of the Venetian Republic. Lady Elena's abilities were first discovered by the Aristotelian John Baptist Fabris, who started her, at age seven, on a life of intellectual activity. After Fabris persuaded Lady Elena's father to cultivate her intellect, Cornaro-Piscopia did all he could to advance his daughter's education, placing her in the hands of two brilliant scholars: Professor Alexander Anderson of Padua, and Professor Luigi Gradenigo, the librarian of St. Mark's. They were assisted by other masters, instructors in various languages such as Greek, Latin, Hebrew, Spanish, French, Arabic, and modern Greek, all of which she learned to speak as fluently as her own Italian.

The first part of her student-life was spent almost entirely acquiring languages. From there she was directed to the study of literature, rhetoric and logic, while her hours of relaxation were devoted to music and charity. The next step was to prepare her for the University examinations, which was undertaken under the tutorship of Professor Carlo Rinaldini of the University of Padua. She remained some years in the University, studying the Arts and Sciences and Theology. At last she went through the examinations for the doctorate and was elected by the examiners on the 25th of June, 1678.

The public ceremony was held in the Cathedral of Padua in the presence of the University authorities, the professors of all the faculties, the students, and most of the Venetian Senators, together with many invited guests from the Universities of Bologna, Ferrara, Perugia, Rome, and Naples. The Lady Elena spoke for an hour in classic Latin, explaining difficult passages selected at random from the works of Aristotle. She was listened to with great attention, and when she had finished, she received plaudits as Professor Rinaldini proceeded to award her with the insignia of the Doctorate, placing the wreath of laurel on her head, the ring on her finger, and over her shoulders the ermine mozetta. This is the scene illustrated in the Vassar College Library window.

After the Lady Elena received the Doctorate, her name was inscribed on the Roll of Honor of many academies in Italy, France and Germany; discourses were delivered in her praise, poems and letters of congratulation were written to her by persons high in the literary world.

The Lady Elena's life was not a long one but one that was devoted to intensive study, religious observance and ministering to the poor. She died at age thirty-eight, July 26, 1684. The funeral was a counterpart of her triumph when she was awarded the Doctorate. The members of all the Faculties of the University attended robed in gown and mozetta, and the casket was carried by four professors to the Basilica of St. Justina, where the funeral services were held. At her request, the body was clothed in the habit of a Benedictine Oblate, which she was at the time of her death. Over the habit was placed the mozetta of a Doctor, and on her head a double garland of lilies and laurels--the first symbolizing her pure life and the other her learning.

Six months after her death, the University of Padua struck a medal in her memory, a mark of distinction they had never before awarded to anyone. Later her statue was placed at the foot of the great staircase of the University where it stands today. Her memory was further perpetuated by a bust placed in the Church of St. Anthony, beneath which there is an inscription.

The book by Jane Howard Guernsey, Vassar Class of 1949, entitled "The Lady Cornaro: Pride and Prodigy of Venice", published in 1999, is the first full-length study of the life of Lady Elena.

The window comes from the studios of Messrs. John Hardman & Company of Birmingham, England, and of the Church Glass and Decorating Company of New York, their U.S. representatives. It was installed in 1906 and has long served as an instrument of instruction and inspiration, as well as a beautiful architectural embellishment. The lights in the tracery represent Grammar, Dialectics, Music, Philosophy, Astronomy, Medicine, Geometry and Theology.

— The Great Window in the Memorial Library Building at Vassar College, published by the Church Glass and Decorating Company of New York.

The window was given by Mary Clark Thompson to grace the west wing of the library she endowed in memory of her husband, Frederick Ferris Thompson. 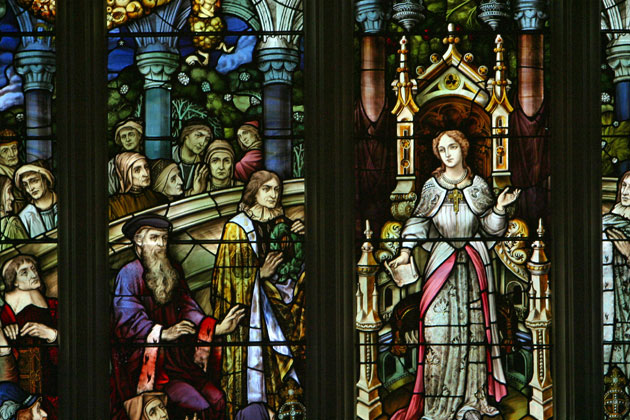