The following stone shields and seals are found over the front entrance to the main library and in the lobby.

Outside over the front door to the left is Oxford.  To the right is Cambridge.  Higher across the middle are (left to right) Yale, Vassar, Wellesley, Bryn Mawr, Smith, and Harvard.  Inside the lobby over the front door are Cambridge and Bryn Mawr.  Over Room 145 are Oxford and Smith.  Over Room 132 are Yale and Wellesley.  Over Room 133 are Harvard and Vassar.  In the lobby over the fireplace are Bryn Mawr, Smith, Wellesley, Vassar and one additional shield (wavy horizontal bar with three stars, sun face in upper left corner) which is the personal shield of Mrs. Thompson. 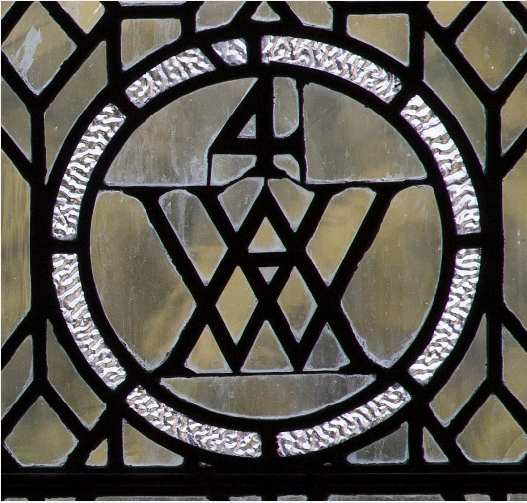 In addition to the shields and seals, there are printers' marks in the windows of Thompson that are representations of those used by printers from England, Alsace-Loraine, Germany, France, Switzerland, Spain, and Scotland during the 15th and 16th centuries. A list of the Printers' Marks, brief biographies of the printers, and descriptions of each mark and its location in Thompson Library are available through Vassar College's Digital Library Printers' Marks collection.