Charles Albrecht was one of the foremost piano makers of German descent in Philadelphia in the 1790's, when this five-octave, mahogany instrument was made. Attractively inscribed and decorated over the keyboard, it has two knee levers beneath, one to raise the dampers and the other to operate a louvered panel over the soundboard. Like the hinged lid panel on the contemporary Broadwood & Son piano also displayed here, this device permits limited dynamic control; however, no serious piano music requires such a gimmick, which was more a selling point than a musical necessity. Unlike Broadwood's factory, which virtually mass-produced standard models, Albrecht evidently custom-made pianos to suit his customers' wishes; no two of his extant instruments are quite alike, but all reveal the fine craftsmanship and tasteful design for which he is noted. 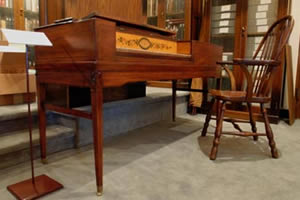