Heinrich Steinweg (1797-1871) began building pianos in his native Germany before emigrating in 1850 to New York, where he changed his name to Henry Steinway and soon took his sons into partnership. Steinway & Sons, like Broadwood earlier in London, revolutionized piano manufacture, among other things adopting massive cast iron reinforcement that permitted the greater string tension, brilliance, and dynamic range demanded by Romantic music. In this rather plain, seven-octave piano, sold to Vassar College in 1865, the strings fan out on two levels across the pinstriped iron plate that was patented in 1859. A row of thirty holes through the bottom aligned beneath the bass keys indicates the former presence of a pedalboard like that of an organ. The two pedals centered beneath the case control the dampers and a mute. 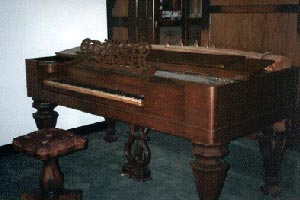